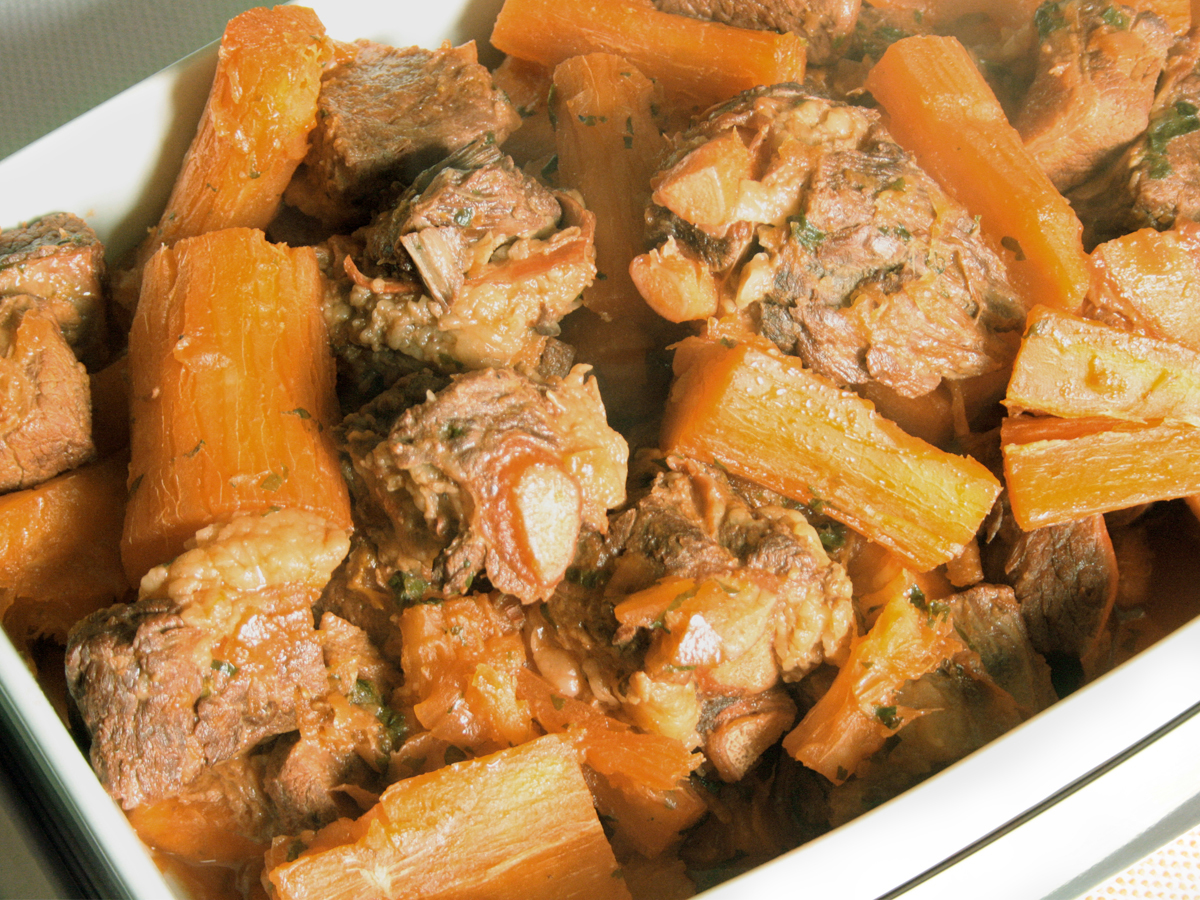 “Vaca atolada” is a typical dish from the inner regions of Brazil, particularly in the state of Minas Gerais (doutheast part of the country). There are some versions about the origin of such a curious name: “mired cow”. One version refers to the appearance of the meat dipped in a thick broth or in manioc cream. Another version dates back the Brazilian colonial times, when the meat was dipped in grease to extend its preservation during transport. (Information source: Sabores de Minas, uai.com.br.)

Preparation method
1. Eliminate any excess fat from the meat, cut it into pieces, season with salt and pepper. Add the garlic and “pinga” and rub the meat well. If you want, you can add other kinds of herbs such as thyme, cumin, marjoram… Allow it to marinate overnight.
2. With little oil, seal the meat with the marinade over high heat.
3. Add the chopped onions and tomatoes, the “colorau” and bay leaves and stir well. Add enough water to cover the meat, cover the pan and cook over low heat for about 2 hours, until meat is very tender. Unfortunately it is very hard to find the “colorau”, but you can also make the recipe without it.
4. Cut off the ends of the manioc root, and cut it into chunks about 5 – 6 cm length. Make a lengthwise slit (2 mm deep) along the manioc chunks. Slide your knife under the peel to separate it from the flesh and remove manioc peel (thin brown skin and thick and pinkish white in color cortex) by hand. Manioc peels can be easily detached from the flesh. Break chunks into wedges and remove the tough core from the centre of each manioc chunk. Wash and set aside in a covered bowl of water to prevent them from darkening. Click here to watch the video “How to prepare cassava”.
5. When the meat is very tender add the manioc (drained) and the chopped parsley. Season with salt and cook covered over low heat for about 30 minutes, until the manioc is soft. Increasing the cooking time will turn the manioc chunks into a thick cream, wich is another delicious version of this recipe.
6. Serve with white rice.